What does Right eye twitching for a Female Mean?

What does Right eye twitching for a Female Mean? | According to Astrology

All of us has experienced twitching of our various body parts from time to time.

Though science will explain them as involuntary muscular movements, but such involuntary movements were looked upon as sign from “The above” regarding some impending destiny.

Almost all ancient civilizations have taken such twitching of body parts especially eyes as an omen, and attached some meaning to it. We may call it Astrology, Samudrik Shastra , or just Omen, people do believe in it. 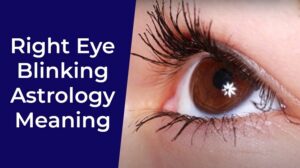 If such a belief system is in existence for thousands of years, then it must be tested by billions of people, and stood the test of time. We will talk about right eye twitching of a female in this article.

So, What does Right eye blinking Mean? And what it means, if you are a woman? (According to Astrology)

In India, it is believed that when left eye twitches it means something bad is about to happen, and when the right eye twitches, it means fortune is smiling on you. This is true for men, and for women it is other way round in terms of eyes.

Now, the question is..

Why we believe in this superstition, and what it means for us? (The science behind it)

Generally, any involuntary body movement or twitch is related with our sub-conscious mind, which is a mystery for us.

Yes, many people do believe that our sub-conscious mind is connected with the divine, and that is why it shows us dreams with omens, it gives us signals in various forms, has many mystical powers like telepathy, future gazing etc.

Thus, ancient civilization believes that such an involuntary twitching of right eye is also a signal from our sub-conscious mind to give us a hint about our impending future or near destiny. We find many references to such omens in famous books like Valmiki Ramayana (written almost 5000 years ago), Astrological treatise (written 3000 years ago) in India. These omens are known as Nimitta Shastra, and comes under Vedangas which means limbs of Vedas.

The Eye twitching and the mystery behind its beliefs..

You may wonder why eyes, and what about the sides left or right?

Eyes always relate with some mystical force, hypnosis, an all-seeing eye, or even an evil eye.

We perceive the reality with our eyes. what we see is the truth, what we cannot is a myth, isn’t it? The indication given by eyes are thus treated as a symbol or a signal towards our future (which though our eyes is able to grasp, but we are yet to experience).

The connection between our brain and eyes or rather other body parts is also rather mystical. Our left side brain controls our right side eye and body parts and vice-versa. Left side brain is considered to control logic, analytical abilities and is considered wise. Whatever our left brain indicates, it shows it through our right body parts. Thus, twitching of right eye for males means logical signal that his fortune is going to rise through his own efforts or wisdom. While, the twitching of right eye for females means some impending trouble, or problem to her or her family.

We have understood the logic of left brain and right eye..

To understand this we need to look into how these omens come into existence. Such omens were treated as part of ancient astrology, as signals from universe.

Thus, in India and other ancient civilizations like Sumerian, Egyptian, these are read by astrologer for good and bad effects.

The case with female changes because in female horoscopy, eighth house is house of her marital longevity and second house shows her family. Thus, any disturbance to second or eighth house shows some impending trouble to her immediate family or to her husband or married life. This was the reason for this omen to find its place in astrology, Samudrik Shastra and later into almost all civilization’s belief system.

Finally, do we need to believe in such superstitions?

Well, I was told by my mom, and she was told by her mother, that you should not ignore these signals or omens. Give it a try, but do not ignore, if it persists, you must see a doctor